The History of Ever Ready Lodge #506

Ever Ready Lodge #506 was organized on July 17, 1924. The late A. W. Jackson was the first Worshipful Master. The Lodge served all eligible men in the surrounding County and cities including Needville and Rosenberg. During the 1940’s, the Lodge grew rapidly with membership predominately from Needville, Texas. Master Masons, A.W. Jackson and Will Routt together organized a Lodge in Needville. Most of the men who resided in Needville joined the newly formed Lodge named Routt’s Pride.

The members moved into the new Hall in January 1993. This was an important development since the Lodge previously rented meeting space until 1960 when land was purchased and paid for over the next five years. An unused Church building was purchased and moved to the present address, 429 West Street and served as the Lodge Hall until construction began on the present Hall. During the period of 1981 through 1994 construction began on the new Lodge Hall at our present site. During that time most of the finishing touches were added to the new Hall with the assistance of James E. Hooper, Reginald Best, Jeremiah Smith and the Building Chairman, Dr. U. W. Watkins, Jr.

From the early 1940’s until present, Ever Ready Lodge has been a viable and noticeable force in Fort Bend and surrounding counties. The Lodge conducted Voter Registration drives and used the Hall as Headquarters for such. Scholarships are given to graduating high school students, financial donations have been made to the Richmond State School, Senior Citizens of Richmond, Rosenberg and Sugar Land, Robert C. Tate Center, Ft Bend County Women’s Shelter of Richmond, Channel 13 Annual Food Drives and other cities and towns in the area.

Our Brothers also belong to various Appendant Bodies, such as: Norris Wright Cuney Order of the Eastern Stars, Heroines of Jericho, Heroines of Templar Crusades, and Order of the Golden Circle. Many of our members also belong to Concordant Bodies, such as: Nobles of the Mystic Shrine; Doric Shrine Temple # 76 of Houston, and have joined the York Rite Holy Royal Arch Masons, Knights Templar, Scottish Rite Masons there are many 32nd and 33rd Degree members who have held elected offices. As of October 2010, there are over 150 Members on the mailing list of Ever Ready Lodge. Membership is made of men who truly seek more knowledge in Masonry.

Ever Ready Lodge # 506 is considered one of the most progressive Lodges in the State of Texas. It has the most members to hold elected or appointed Grand Lodge offices and because of the Masonic works being done by its members. Ever Ready Lodge # 506 was awarded Lodge of the Year 2007-2008 by the Most Worshipful Prince Hall Grand Lodge of the State of Texas. The same year, Past Master Clarence B. Douglas Jr., was named Master Mason of the Year for “Outstanding and Devoted Service”. 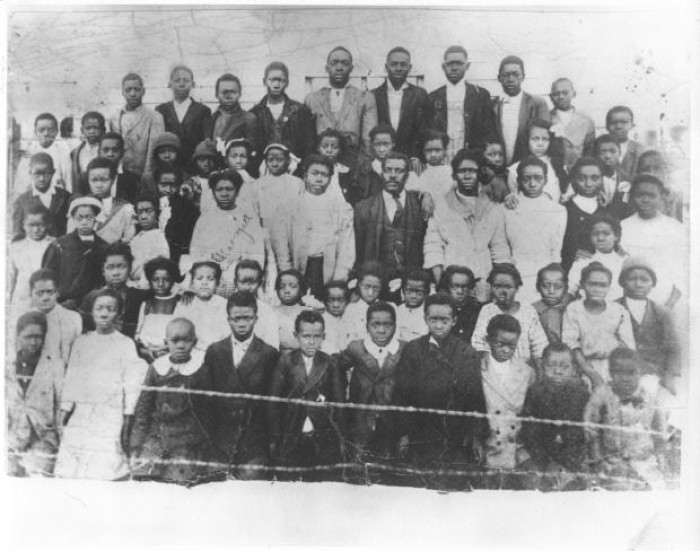 A. W. Jackson (educator) is pictured at center in dark suit and tie. Rosenberg, TX, 1920