"The Origin of Prince Hall Freemasonry"

“Throughout history, the powers of single black men flash here and there like falling stars, die sometimes before the world has richly gauged their brightness “
– W.E.B. DuBois

Prince Hall, our Founder, was one of our great Americans; a Worthy Grand Master associated with our first Grand Lodge and its expansion. His name is carried and borne by our Masonic organizations in the United States, and thousands of Masons, who regard themselves as descendants from the Grand Lodge of England from which received his authority more than two centuries ago. We in America celebrated in 1976 the two hundredth anniversary of our Declaration of Independence. This is also the two hundred and, first (201st) anniversary of the founding of Prince Hall Masonry. It is a monument to Prince Hall’s life, career and leadership.

Many rumors of the birth of Prince Hall have arisen. Few records and papers have been found of him either in Barbados where it was rumored that he was born, but no record of birth, by church or state, has been found there, and none in Boston. All 11 of the counties were searched and churches with baptismal records were examined without a find of the name of Prince Hall. The first record that we have of Prince Hall is a manumission paper filed by William Hall of Boston, and found in the Boston Athenaeum. This document tells us.

“Prince Hall has lived with us 21 years and served us well upon all occasions, for which reasons we maturely give him his freedom and that he is no longer to be reckoned a slave, but has been always accounted as a freeman by us, as he has served us faithfully. Upon that account, we have given him his freedom. As witness our hands this ninth day of April, 1770.

In appearance, our Prince Hall was unlike the portrait, which has been used of him, which was near to a white man in appearance. William Bentley of Salem, Massachusetts, once described him at a Turtle Feast in Salem, Massachusetts as, “An African and a person of great influence among his color in great Boston, being Master of the African Lodge and a person to whom they refer with confidence their principal affairs.” Another, William F. Haywood in his Minutemen and Mariners described another Turtle Feast, “There was one outstanding expert: Prince Hall, a tall, lean Negro of great dignity. He always did, for whenever a well-to-do person wished the best catering job in eastern Massachusetts he sent word to Prince Hall in Boston, and when the time came he appeared with a dozen of his black men or two dozen if the banquet was a large one.” This author described how “four of Prince Hall’s Africans stepped smartly into the tent bearing on their shoulders the great turtle shell filled with a pie to the delight of the guests.” These descriptions make Prince Hall as an African with an African crew. He seemed to be a black man among black men or he would have pointed out, if otherwise.

A significant event in Masonry on March 6, 1775, Prince Hall and fourteen other men were initiated in Masonry through Warrant No. 459, which is still in our possession. John Batt, who was of the 38th Foot Regiment of the British Army having enlisted in 1759 and learning of the American cause re-enlisted in its Army. The enlistees were Prince Hall, Cyrus Johnston, Bueston Slinger, Prince Rees, John Canton, Peter Freeman, Benjamin Tiler, Duff Ruform Thomas Santerson, Prince Rayden, Cato Speain, Boston Smith, Peter Best, Forten Horward, and Richard Titley. The writer has this record. A Permit was issued for these Masons to meet as African Lodge No.1 and they became the first Black Masons in the United States. Prince Hall enlisted and served as a soldier in the 2nd and 6th Regiments of Massachusetts. In this connection, George W. Williams, historian, wrote in 1884, “that he saw hard service we know by the record of the two regiments he served in, always distinguished for steadiness’ and valor. Prince Hall was not only a good soldier, he was a statesman.”

As the years passed, Prince Hall decided to approach England again, the war being over in 1783, On March 2, 1784, he wrote a letter to William Moody, Worshipful Master of Brotherly Love Lodge No. 55 in London, England, stating that the African Lodge had been in operation for eight years and they had only “a Permit to walk on St. John’s Day and to bury their dead in manner and form” and he thought it “best to send to the Fountains from whence he received the Light for a Warrant.” This Warrant or Charter was prepared but was not sent. Three years passed then the cost of it had not been received in London. It seems that Prince Hall had sent it but it had not been delivered.

Finally, he was careful in selecting his messengers and asked Captain James Scott, brother-in-law of Governor John Hancock of Massachusetts, a signer of the Declaration of Independence. Captain Scott delivered the letter, the money and received the Charter Warrant. Prince Hall acknowledged this receipt and added in his letter to England, “By the grace of God, I shall endeavor to fulfill at that is required of me in the Charter and I shall make the Constitution my guide.” He added, “I hope we can adorn our profession as Masons.” This Charter is in the possession of African Lodge of Massachusetts and is kept under lock and key. Some of us have seen it and treasure it for it is the only Charter in existence from England, our source, available today to Masons. A recognition of this fact was adopted in a report of a unanimous committee in 1946 of the historic Northern Jurisdiction but it was delayed by another committee’s action, but it is worth noting: “It is believed to be the only original Charter issued from the Grand Lodge of England – which is now in the possession of any lodge in the United States.”

Some white Masons say that Blacks were not denied admission to white lodges and they point to the very few and the presence of others by invitation as proofs. We believe the contrary for D. Bentley, a contemporary who wrote in his diary, available to all, “The truth is they are ashamed of being on equality with blacks. Even the fraternities of France, given to merit without distinction of color do not influence Massachusetts Masons to give an embrace less emphatically or tender affection to their Black Brethren … It is evident that a preeminence is claimed by whites.”

The question of extending Masonry arose when Absalom Jones of Philadelphia, Pennsylvania, appeared in 1791 in Boston. He was an ordained Episcopal priest and a Mason who was interested in establishing a Masonic Lodge in Philadelphia. In 1792 Black men come from Providence, Rhode Island to Boston to inquire about Masonry. They attended to hear the charge by Prince Hall who spoke of the presence of these men, “my dear brethren of Providence, who are at a distance from and cannot attend the lodge but seldom.”

Masons in both places, made in England or the West Indies or elsewhere came to Boston to see Prince Hall and mentioned their cities as places for lodges. At a subsequent assembly the African Grand Lodge was formed in 1791 by delegations from Philadelphia, Providence and New York in an assembly, which was a Grand Lodge. Prince Hall regarded, as Grand Masters was the source and remained in this capacity until his death. African Lodge, in Philadelphia, and Hiram Lodge, in Providence, came under his aegis in 1797. With growth and expansion the movement went West and South.

Prince Hall died December 4, 1807. His successor was Nero Prince who sailed to Russia in the year 1808, George Middleton succeeded him, 1809-1810, Peter Lew, Samuel H. Moody and then the well known John T. Hilton who recommended a Declaration of Independence from the English Grand Lodge in 1827, which the Grand Lodge of Massachusetts had done in 1772 and assumed powers and prerogatives as an Independent Grand Lodge.

November 7, 1828, first black newspaper, praised Prince Hall as “the founder of African Lodge of Boston, and for his “work for the Grand Masonic Lodge.” The heritage which Prince Hall left us has authentic and factual goodness to us as Masons, and we go forward distributed in 44 Grand Lodges, Eastern Star, two Supreme Councils, Golden Circles, Shriners, Daughters of Isis, Brother and Sisters in the United States, the West Indies, Canada, Liberia and West African, all doing a great work and spreading a good cause in Masonry. To all these and those who read this we say as Prince Hall said in 1797:

“Blessed be God, the Scene is Changed! They no confess that God has no respect of persons, and therefore receive them as friends and treat them as brothers. Thus doth Ethiopia stretch forth her hand from slavery to freedom and equality.”

“The above historic record was prepared and published on March 20, 1981 in the First Edition of the Prince Hall Masonic Directory upon a special request from the Conference of Grand Masters, Prince Hall Masons. Dr. Charles H. Wesley was an ordained minister in the African Methodist Episcopal Church. He was an outstanding Historian, Educator and Author. Dr. Wesley was a Prince Hall Mason, a member of Hiram Lodge No.4, Jurisdiction of the District of Columbia. 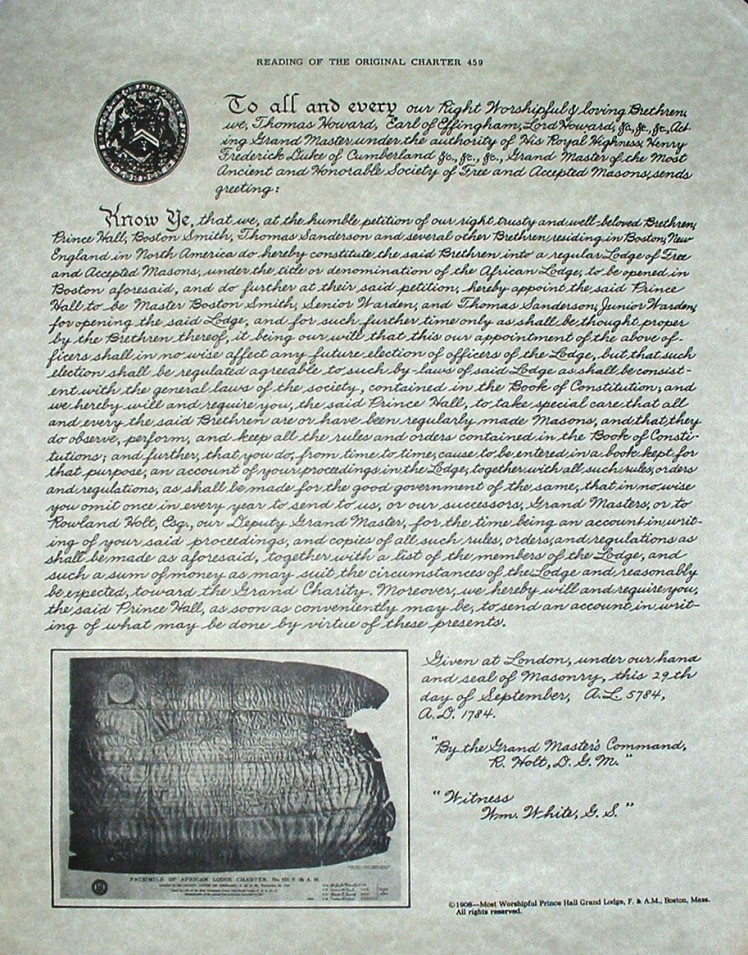 In 1869, the Prince Hall Charter for African Lodge #459 was partially burned due to a catastrophic fire that destroyed Massachusetts’ Grand Lodge Headquarters. Our charter was spared due to the bravery of then Grand Master S. T. Kendall who crawled into the burning building to save the charter from being destroyed. Since it was housed in a metal tube, it was able to survive, however badly burned. Today it is housed inside a financial institution in downtown Boston, secured by a heavy glass plate.